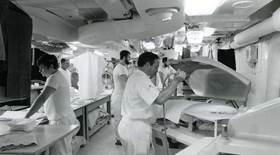 As this was the Royal Yacht, unique customs and practices were in operation for the crew. Every measure was taken to preserve Royal tranquillity; orders were given by hand signal, soft-soled white plimsolls were worn to reduce noise, and any work near the Royal Apartments had to be completed by 8.00am. The crew were to be as unobtrusive as possible, and if a Yachtsman did encounter a member of the Royal Family, he had to stand still and look straight ahead until they had passed. Formalities were relaxed on occasion, such as when the 'Yotties' performed in end of voyage 'Concert Parties' in front of the Royal Family or during the Western Isles holidays.