Britannia was the first Royal Yacht to be built with complete ocean-going capacity and designed as a Royal residence to entertain guests around the world. When she was decommissioned in 1997, it marked the end of a long tradition of British Royal Yachts, dating back to 1660 and the reign of Charles II.

There is additional information about Britannia's specifications and construction contained in the technical paper.

Britannia's predecessor was the Victoria & Albert III - the first Royal Yacht not to be powered by sail. It was built for Queen Victoria, but she never stepped on board, concerned about the yacht's stability. King Edward VII did sail on the Victoria & Albert, mainly in local waters and the Mediterranean. Having served four sovereigns over 38 years and not left Northern Europe since 1911, the Victoria & Albert was decommissioned in 1939. She was eventually broken up for scrap at Faslane in 1954 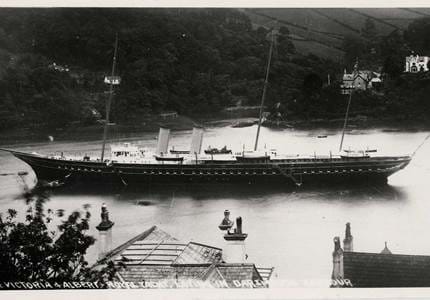 It was decided that a new Royal Yacht should be commissioned that could travel the globe and double as a hospital ship in time of war. It was also hoped a convalescence cruise would help the King's ailing health. The John Brown & Co shipyard in Clydebank received the order from the Admiralty for a new ship on 4 February, 1952. Sadly King George VI, The Queen's father, passed away two days later. Not only did The Queen now have to prepare for her new role, but she also had responsibility for the commissioning of the new Royal Yacht. 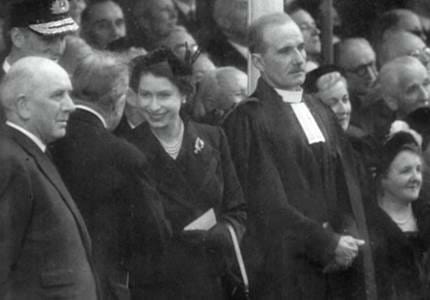 John Brown & Co was one of the most famous shipyards in the world, having built the famous liners Queen Elizabeth and Queen Mary. The keel of the new, as yet unnamed, Royal Yacht was laid down in June 1952. One of the last fully-riveted ships to be built with a remarkably smooth painted hull, she was finally ready to be launched on 16 April, 1953. The ship's name was a closely guarded secret, only being revealed when The Queen smashed a bottle of Empire wine (Champagne was considered too extravagant in post-war Britain) and announced to the expectant crowds "I name this ship Britannia… I wish success to her and all who sail in her". You can read more about getting Britannia ready for Royal service by downloading Letters from a Fish to his Admiral (below), a series of notes and letters written by Acting Captain J S Dalglish, the Officer in charge of commissioning Britannia. John Brown continued as a shipyard until they sadly closed in 2001.

Letters from a Fish to his Admiral (pdf) 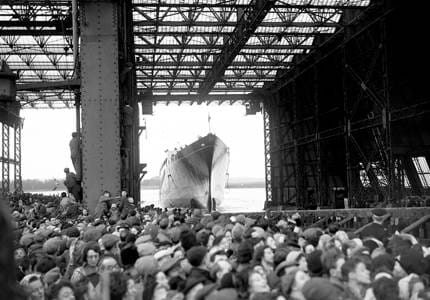 After the launch, Britannia's building work continued as her funnel and masts were installed, before beginning sea trials on 3 November 1953 off the West Coast of Scotland. On successful completion, she was commissioned into the Royal Navy on 11 January 1954. On 22 April, Britannia sailed into her first overseas port as she entered Grand Harbour, Malta. During 44 years in Royal service Britannia sailed the equivalent of once round the world for each year, calling at over 600 ports in 135 countries, including the United States of America, Australia, Canada and New Zealand. 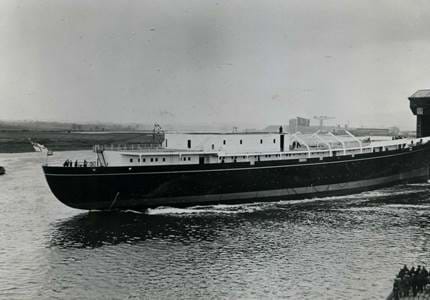 Britannia was an ideal Royal honeymoon venue. The Royal Yacht was very private and could sail to secluded locations. Four Royal honeymoons were enjoyed on board, Princess Margaret and Anthony Armstrong-Jones being the first in 1960. 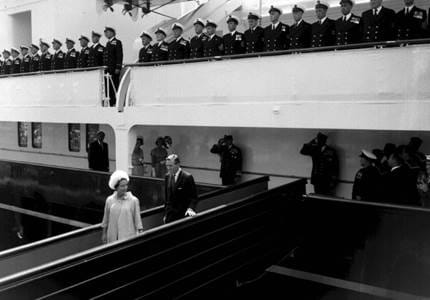 THE FIRST DAY AT SEA

As well as hosting state functions, Britannia was an ambassador for British business, promoting trade and industry around the globe. These British overseas trade missions were known as ‘Sea Days’ and an invitation to come aboard proved irresistible to the world’s leading business and political figures. The Overseas Trade Board estimated that £3 billion was made for the Exchequer as a result of commercial days on Britannia between 1991 and 1995 alone. 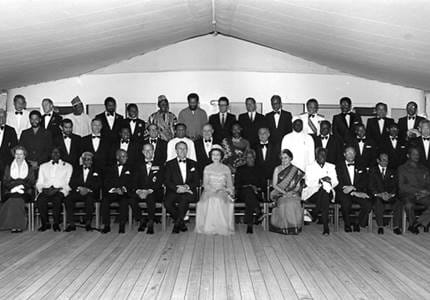 At 20:00 on 17 January 1986, the Yacht dropped anchor at Khormaksar Beach. Civil war had broken out in South Yemen and ships were urgently required to evacuate British nationals and others trapped by fighting. As a non-combatant Royal Navy ship, Britannia would be able to enter territorial waters without further inflaming the conflict. 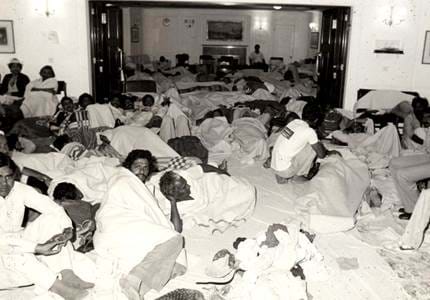 "Looking back over forty-four years we can all reflect with pride and gratitude upon this great ship which has served the country, the Royal Navy and my family with such distinction." - Her Majesty The Queen. View the entire Paying-Off Ceremony letter from the Queen below. 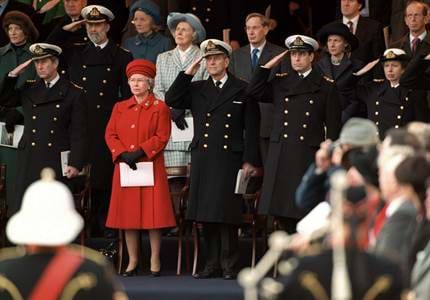