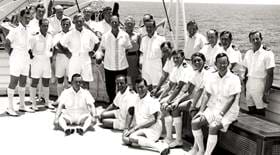 Royal Tour of the Commonwealth 1954 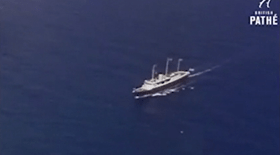 Watch this historical footage of Britannia at sea during the Royal Tour of the Commonwealth in 1954.

When Yachtsmen joined Britannia, they were given a handbook explaining the rules of Royal Yacht Service. The following is an extract relating to the ship's customs.

There are many Royal Yacht customs. Some are best passed on verbally, but a few are given below:

There is no broadcast system, and pipes are never made. The routine is run silently by Royal Yachtsmen taking times from Daily Orders, which must be read carefully. Alterations in routine are carried out by means of RED HOT NOTICES which are displayed at salient points in the ship.

Officers and Royal Yachtsmen should be neither seen nor heard near the Royal Apartments. As far as possible, spoken words of command are avoided throughout the Royal Yacht. Gym shoes are always worn by Royal Yachtsmen to help preserve silence.

Royal Yachtsmen must at all times respect the privacy of the Royal Family and their guests. Happenings onboard, whilst on Royal Duty or at any time, are not to be recounted outside the Yacht. Particular care must be taken in this respect with the Press.

4. Going Abaft the Mainmast after 0900 when Standard is Flying

No Officer or Royal Yachtsman should ever go abaft the Barge or 2nd MB, or the first square ports in the Waists, after 09:00 unless on a specific duty (i.e. preparing for entering or leaving harbour, manning the side etc). If it is essential for any reason to carry on work abaft the mainmast after 09:00 permission is first to be obtained from either the Commander, the First Lieutenant or the OOW who will check that it is acceptable.

Royal Yachtsmen having to get to the Quarterdeck or QD locker are to use the underground route via the Engineer's Office flat.

5. Caps Off Abaft the Mainmast

Royal Yachtsmen remove their caps when abaft the mainmast with the Standard flying or with Royalty aboard. The only exception is when fallen in aft for entering or leaving harbour or for man ship. The piping party always takes caps off.

There are no defaulters in the Royal Yacht. Any man whose conduct does not measure up to the standard required by the Commodore, Royal Yachts, is drafted at once to the nearest ship or shore establishment.

Except when otherwise ordered, the only person piped when arriving onboard or leaving the Royal Yacht is Her Majesty The Queen (or HRH The Duke of Edinburgh when only he is embarked, and in Naval Uniform).

Whenever Royalty goes in the Barge, the Commodore or his representative goes in command of the Barge, with an officer of the Barge at the conning position.

The bugle is never sounded onboard. National Anthems are never played except for morning colours and on Beat Retreat.